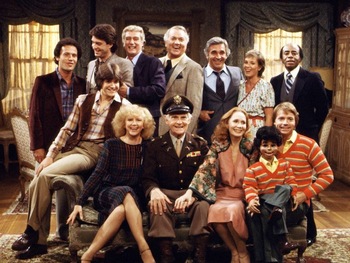 Clockwise from top left: Jodie, Danny, Burt, Chester, Dutch, Eunice, Saunders, Chuck (and Bob), Jessica, The Major, Mary, Billy.
Not shown: Corinne, Peter, Father Tim, Benson.
"This is the story of two sisters: Jessica Tate, and Mary Campbell.
Jessica lives in a neighborhood known as Rich. Jessica likes life. The only thing she would change about life, if she could, is that she would set it all to music. The Tates have more secrets than they do money.
Mary, too, likes life. Unfortunately, life doesn't seem too crazy about her. As you can see, the Campbells don't have nearly as much money as the Tates. They do, however, have as many secrets..."
— Season 1's Opening Narration, as read by Rod Roddy.
Advertisement:

Created by Susan Harris (who wrote most of the episodes and later created The Golden Girls), Soap is a 1977–81 ABC comedy series that both parodied and emulated the serial storytelling style of the Soap Opera. It was perhaps the first Sitcom to include a Story Arc of any significance, and as such is still a rarity even today.

Set in the fictional Dunn's River, Connecticut, the series followed the misadventures of the wealthy Tate family, and the equally bizarre misadventures of their relatives, the far less wealthy Campbells. Over the course of a few years, they face adultery, a murder trial, abduction by aliens, demonic possession, cultists and mental illness (several times). The cast consisted of a large ensemble, including Katherine Helmond, Robert Mandan, Cathryn Damon, Richard Mulligan, Ted Wass, Robert Urich, Billy Crystal, and Robert Guillaume as Benson, the cynical housekeeper to the Tates, who was soon spun off into his own show (in which he would eventually become lieutenant governor of his state.)

It is also notable for being one of the first major series to feature a homosexual major character. Even more remarkably for the era, said gay character managed to survive relatively unscathed throughout the entire series.

Confused? You won't be after these examples of... Tropes!: