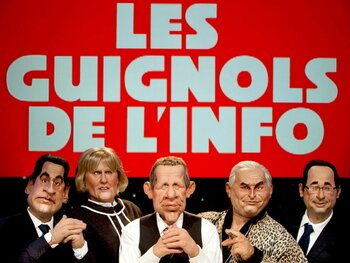 Les Guignols de l'info was a popular French News Parody and Satire puppet show broadcast on Canal+. Essentially the French version of Spitting Image, it used latex puppets as caricatures of prominent political figures to satirize national and international politics and heads of state in sketches but also touched upon other topics such as sports, cinema, music and French television in general.

The name of the show came from Guignol

, a famous French satirical puppet of the early 19th century. The puppets were designed and made by the workshop of Alain Duverne, who also worked on the previous major French political satire show, Le Bébête Show, which Les Guignols rivaled then overtook, and the kids' show Les Minikeums.

From their beginning in 1988 (when the show was known as Les Arènes de l'info) to 2015 it was hosted by PPD, a puppet of famous French news anchor Patrick Poivre D'Arvor (or PPDA, as he is better known by the audiences)note PPDA having been fired from his real life job on the channel TF1 in 2008, the authors had also introduced for a time a new anchorman, Harry Roselmack, who worked every Friday as his "apprentice". The show enjoyed tremendous popularity through the years that continued for more than two decades, and had been credited with introducing younger generations to politics and even of influencing the French public's views on certain politicians.

For instance, the show's portrayal of Jacques Chirac during the 1995 Presidential election as a likeable everyman getting backstabbed and betrayed by former friend and rival Édouard Balladur (then Prime Minister) was claimed to have helped him get elected. Though the writers denied any intentions of influencing voters, they made no secret of their left-leaning political tendencies (they didn't spare left-wing politicians nevertheless).

A Spanish version (Las Noticias del Guiñol) ran on Canal+ Spain and later on Cuatro between 1995 and 2008, and it was as influential as its French predecessor.

In 2015, after billionaire Vincent Bolloré bought Canal+, his first decision was to move the show to a less favorable timeslot and fire most of its writers. After a brief cancellation, the show resumed airing in late 2015 but with a different host and a drastically changed formula more focused on skits and far tamer in its comedy. Alas, audience ratings were appalling and the show was definitively put to rest in 2018, three months after its 30th anniversary.

Vivendi Entertainment is now working with Fox on an American version.

It even extends to his own son.

There you go, you can now turn off your computer and resume a normal activity.