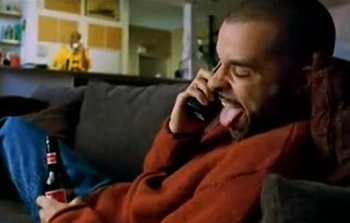 , the basic premise of which is a phone conversation wherein all speakers are enthusiastically shouting "WAZZUP!" at each other. At the end, one guy asks the first what is actually up, and he responds that he's "watching the game, having a Bud."

only this time it's a political advertisement, advocating then-Senator Barack Obama. This one is notable for having a much more serious tone since the last one, the general theme being how badly the previous eight years have been for the characters.

Wazzup has been referenced and parodied multiple times.