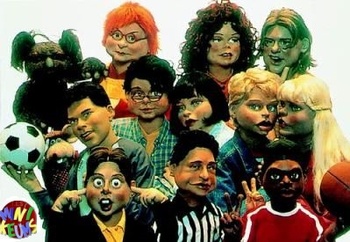 Les Minikeums is a French morning and afternoon kids show with puppets, the first iteration of which started airing in 1993 on the public channel France 3. Some of the puppeteers and the workshop of Alain Duverne (which made the puppets) also worked on TF1's Le Bébête Show and Canal+'s Les Guignols de l'Info.

Its hosts are a cast of wacky characters the likeness and names of which are based on show business and sport celebrities. They provide comedic skits, parodies of pop culture franchises and full-fledged adventures in short films, as well as songs and music videos.

While its rival show from 1993 to 1997, the Club Dorothée, was credited for massively bringing animes and tokusatsu in France, this one used to broadcast of some of the finest Western Animation series of The '80s and The '90s with the likes of some Nicktoons, the DC Animated Universe, Animaniacs and more. It also used to broadcast a lot of French-Canadian animated series, as well as a number of animes (basically the most prominent ones that the Club Dorothée didn't own the rights to, most notably from World Masterpiece Theater, and with a tighter control on violent content than the Club Dorothée).

The show's first iteration ran from 1993 to 2000. France 3 youth programs head manager Eve Baron then decided, despite great audience ratings, to "modernize" the show at the Turn of the Millennium, renaming it MNK, reducing the lineup to 6 puppets, suppressing the comedic skits and replacing the colorful and practical sets with a grey futuristic city background in CGI. Audience ratings predictably plummeted and the show was terminated in 2002.

The first iteration of the show is still looked at fondly by many French adults who are nostalgic of their childhood in The '90s. So much so that special event reruns of it, titled Génération Minikeums, had much success, which led to a revival of the show in December 2017 on France 4, with a new lineup based on celebrities of The New '10s and The New '20s. The revival show was quietly cancelled in 2021 amidst the restructuring of France 4 and the sketches that were uploaded on the official YouTube channel were all removed.

Series that were broadcast in the original show (with their French titles):

Series that were broadcast in the revival show (with their French titles):