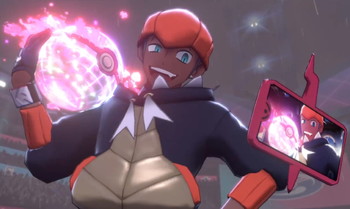 "Activating my Pokémon's Gigantamax Form? I've got a second for a selfie."
Ian: He's even taking part in all those stupid selfie trends.
Anthony: "#AfterSex"! "#AfterPoooop"! "#AfterWorkoutBuuuuutt"! "#AfterMurder"!
— Smosh, "ADDICTED TO SELFIES

A Selfie Fiend is a character who is always taking selfies of themself. They're usually female and usually a teenager or 20-something. Even in inappropriate times, they'll want to take a selfie. Selfie Fiends often have a narcissistic interest in themself. They also tend to be fashion oriented.

Selfies have existed for decades, but they really caught on in the 2000s when social media became popular and smartphones became omnipresent. As a result, this is a newer trope. This trope is an evolution of Phoneaholic Teenager and often overlaps with it. The difference is that Selfie Fiends spend a lot of time on their phones taking pictures, while Phoneholic Teenagers usually use their cellphone to talk or text.

Related to Camera Fiend, which is about taking pictures of others. If their inappropriate selfie timing endangers their own lives (or others), that's Social Media Before Reason.