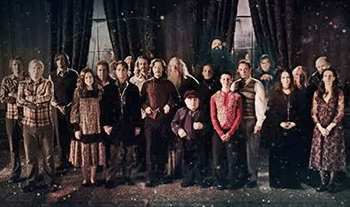 And they wonder how Voldemort found out about them.
Advertisement:

What is the first thing you do when you get a secret organization of people together, be they heroes or villains? After all, this is supposed to be something that no one else can know about for various reasons, so you can't have matching uniforms, and secret passwords can be cliche.

Of course! You get everyone in one generalized location and throw a party of some sort. Maybe the heroes have some laughter and drinks to celebrate a victory, or the villains get to glower at each other.

Then somehow everyone is called together for a group picture that gives away the connections between every member at a glance, from a glowering glance to a fond smile, and the professional photographer says "Cheese!" They even stick around long enough that everyone there can get a copy for their nemesis, children or investigators to find!

These often crop back up at plot points, either as a method of finding the next 'clue' or a hit list by the group's enemies.