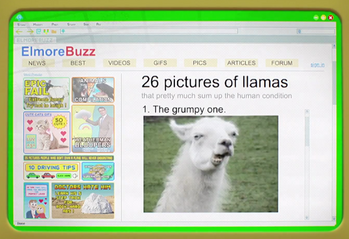 Penny: FuzzBeat?
Kady: It's, like, a website. They do serious news and cat videos at the same time.
Penny: That's fucking dumb.
— The Magicians (2016)
Advertisement:

A "news" site, but it's cool and appeals to the youth — which is to say that it doesn't do much news at all.

This is a specific type of Fictional Counterpart that arose in The New '10s, riffing most prominently on Buzzfeed and other journalism enterprises that are mostly online such as Vice, Vox, and those under the G/O Media

umbrella (A/V Club, io9, etc). Specifically, it parodies or satirizes such online publications by portraying them as hip and trendy but also shallow. The staff of such sites will be populated by clueless young hipster bloggers more concerned with fun or Immoral Journalists more concerned with clicks and revenue than creating honest content, and its audience will similarly be attention-deficient youths and/or extremely bored people.

The site will consist of about 2% serious news and opinion columns and 98% memes, listicles, articles with funny clickbait headlines, and cat videos; writers will always be pressured to create viral content that generates revenue over actual newsworthy topics. Its offices will be a Wacky Startup Workplace with lots of space and amenities, helping it look cutting-edge and modern. If a character gets a job here, it will never be portrayed as a 'serious' enterprise compared to those respectable print media places, and their job security will always be tenuous.