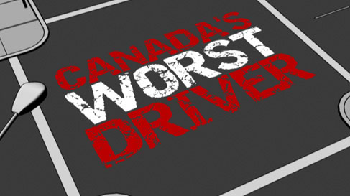 A Canadian Reality Show which focuses on rehabilitating the worst drivers in The Moose And Maple, as nominated by their friends and family members. The object of the show is essentially to learn enough about proper driving in order to "graduate" from rehab, done in the form of different challenges meant to build specific driving skills. In other words, you don't want to move on to the next round. The "winner" (or should we say loser) in the end is crowned the titular "worst driver", and often receives an equally crappy looking trophy.

While the show's goals are serious, a lot of it is mainly Played for Laughs. Yes, there are Asian Drivers. Yes, there are Women Drivers. And two contestants (Emily of Season 4 and Flora of Season 8) were both. They're no worse than the other contestants (unless, of course, that person "wins"). The show started in September 2005 and is still ongoing. Season 9 was retitled Canada's Worst Driver Ever, and brought back "winners" from earlier seasons for a "who's the worst" competition; the show returned to its usual title and a new crop of bad drivers with Season 10.

In certain regionsnote Confirmed in both US and NZ so-far, you can now see two seasons of the show, Season 8 and Season 9 (Worst Driver Ever) on Netflix and certain seasons, (season 10 at least) have been uploaded to YouTube by the producers themselves.

Season 14 premiered on October 29, 2018. On May 21, 2019, it was announced by host Andrew Younghusband via his personal Facebook page that the previously aired fourteenth season of Canada's Worst Driver had been the last season, and that the show would not be renewed for a fifteenth season. No reason was given for the show's cancellation.