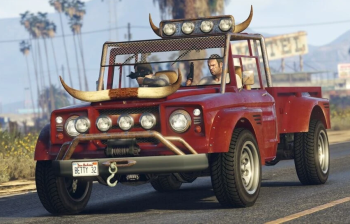 A pair of cattle horns is mounted on the hood or sometimes the front grille of their vehicle is a visual trope that's often used along with style of dress to show that a character is from the western part of the United States, or occasionally more specifically that they are from Texas or somehow involved in the cattle business. Sometimes it can also just be there because they're a lover of the West.
Advertisement:

Your driver may be a Fat, Sweaty Southerner in a White Suit.

Not to be confused with Hood Ornament Hottie.