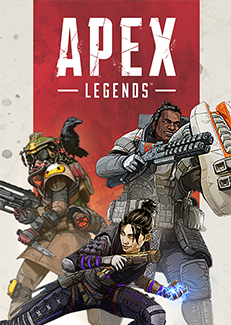 They kill you, they're better. You kill them, you're better.
Advertisement:

Apex Legends is a Free-to-Play Battle Royale Game Spin-Off of the Titanfall franchise, developed by Respawn Entertainment, and released on the Sony PlayStation 4, Microsoft Xbox One and PC on February 4, 2019, with a Nintendo Switch version released on March 8, 2021. Inspired by First Person Shooters and Hero Shooters, players are grouped into cooperative squads of three and pitted against others in matches of upwards to 60 players, where they are dropped onto a map to scrounge for weapons, ammunition and equipment, while remaining as the last team standing.

Unlike most Battle Royale Games, Apex Legends grant players the ability to resurrect their fallen allies by taking certain actions within a period of time. Furthermore, unlike Titanfall, players do not have access to the titular Humongous Mecha, nor is Le Parkour, such as Double Jump or Wall Running, present in the game. Rather, players choose the "Legends", a character from an initial group of eight, each possessing different skills and abilities to help their respective squads in combat.

Set 18 years after the events of Titanfall 2, Apex Legends takes place within a region of the Frontier called "the Outlands", where a competing Blood Sport called the "Apex Games" is played between pioneers, explorers and outlaws.

In 2021, Dark Horse published a comic series based on the game, titled Apex Legends Overtime.

In 2022, Lightspeed and Quantum, the developers of PlayerUnknown's Battlegrounds Mobile, developed Apex Legends Mobile, and currently is in a soft launch in select countries before its planned global release in summer of the year.

Tropes that apply to Apex Legends: