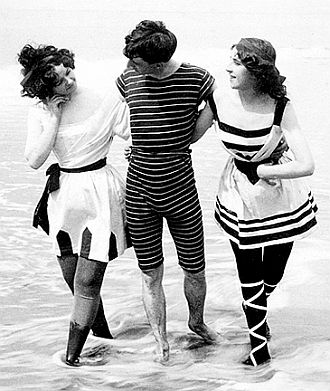 Before the 20th century, people who wanted to go swimming in mixed company but keep their modesty would wear bathing costumes that covered nearly as much skin as their regular clothing. In fact, men could be arrested for swimming topless. These are relatively rare in Western culture in the current day, but are still used in cultures where body modesty is considered paramount, such as among Muslims (the style is called a "burqini"). note Interestingly, this style is in a sense being reintroduced to the West thanks to Muslim immigration; and with even Muslim women becoming fashion-conscious, non-Muslim women themselves are beginning to take a liking to them (they look a little like bodysurfing suits). Not to be confused with modern wetsuits or bodyskins, which also cover more skin but are for protection and competition purposes, not modesty. And especially not with the Creepy Old-Fashioned Diving Suit.

In fiction, these will be seen either in period stories where they're appropriate, or on an individual character to show that he or she is hopelessly old-fashioned, extremely modest, or downright prudish. Stereotypically, the horizontally striped models from between 1900 and 1910 are used (the page image is from 1906), as swimwear started becoming more daring in the 1920s.

Note that in the late 19th century it was often still considered obscene to be seen even in an Old-Timey Bathing Suit, and beaches installed elaborate bathing machines

to ensure there was no chance of accidentally seeing a woman's legs from the beach. Annette Kellerman, the Australian swimmer who was one of the first women to attempt to swim the English Channel, was arrested for indecent exposure in Boston when she appeared in public in a swimsuit of her own design.

That made this kind of swimsuit also a porn trope when bathing machines were at their zenith, before mixed gender bathing started to become more acceptable in the 1900s. Even during The Edwardian Era, when standards started to relax, the female version of the Old-Timey Bathing Suit, with its extremely short (by the standards of the 1900s) skirt and the sheer (usually black) silk stockings that always covered the wearer's legs, was an immensely popular motif in the pinup art and photography (the so-called "French postcards") of the period. The famous illustrator Charles Dana Gibson (creator of the "Gibson Girl"), for instance, drew a lot of pictures of beautiful young women disporting themselves at the seashore in these outfits — very likely, according to one biographer, so that he could legitimately draw shapely and exposed feminine legs.

That Time I Went to the Beach

Rimuru's swimsuit is a bit old fashioned, emphasizing that his body is actually genderless.

That Time I Went to the Beach

Rimuru's swimsuit is a bit old fashioned, emphasizing that his body is actually genderless.