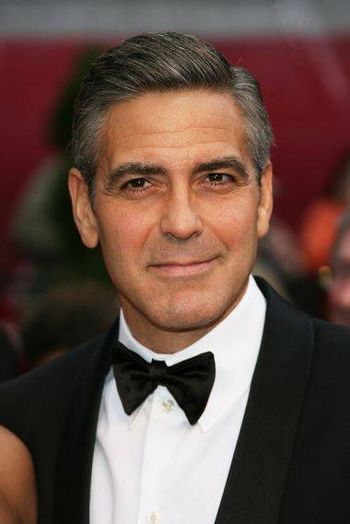 The man knows how to wear a tux.
"Clooney, you smug bastard. Why do you have to be so much better than the rest of us?"
— A forum poster.

George Timothy Clooney (born May 6, 1961) is an American actor, director, screenwriter and producer. The son of Cincinnati broadcast journalist Nick Clooneynote Famous in the game-show community for having hosted the short-lived ABC game show The Moneymaze, infamous for bleeding money due to taking far too much time in putting up and taking down the set, in addition to taping and nephew of singer Rosemary Clooney, George's acting career got off to a slow start, but he hit the bigtime when he was cast as Dr. Doug Ross on ER, which earned him Golden Globe and Emmy nominations and propelled him to stardom. He left the show midway through Season 5 (relatively early on in its fifteen-year run, so much so that many of Clooney's younger fans don't know he was ever on it) to pursue a film career full-time.

This had gotten off to a rather poor start with the infamously bad Batman & Robin, in which he was Batman; legend has it that Clooney will refund the ticket price of anyone who approaches him and says they saw the film. However, he quickly became a regular with The Coen Brothers, appearing in such films of theirs as O Brother, Where Art Thou?, Intolerable Cruelty, Burn After Reading and Hail, Caesar!. He likewise formed a partnership with Steven Soderbergh, which led to both some major blockbusters in the Ocean's Eleven series (probably the film role that best sums up Clooney's screen persona), and some smaller serious dramas, such as Solaris. As if this wasn't enough, he moved into directing and screenwriting, earning Oscar nominations in both categories for Good Night, and Good Luck. in 2005; that same year he won the Best Supporting Actor Oscar for his role in Syriana. Three nominations for the Best Actor Oscar followed, for Michael Clayton in 2007, Up in the Air in 2009, and The Descendants in 2011; that same year he earned a second writing Oscar nomination for The Ides of March, all the while using his spy satellites to build a case against Sudanese war criminals

. In 2012, he won his second Oscar for co-producing Ben Affleck's Argo, which won Best Picture.

On- and off-screen, George Clooney is recognized as a major sex symbol, and was for a long time one of Hollywood's most famous bachelors. In 2014 he married Amal Alamuddin, a human rights lawyer. In June 2017, she gave birth to twins Ella and Alexander. He is frequently cited as one of the world's sexiest men, and is compared to Cary Grant in his Old Hollywood style. Also known for his very vocal liberalism and his more general humanitarian work. The latter has led to him being dubbed the "class president" of Hollywood. He has so far avoided any major scandals and appears to be a genuinely normal, down-to-earth, and of course inconceivably handsome man. Women want him; men want to be him; men want him too. What a guy...

He is the cousin of the late Miguel Ferrer.