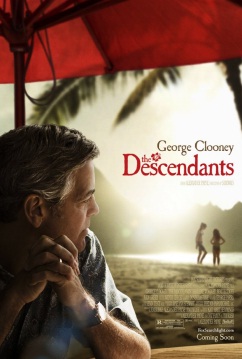 The Descendants is a 2011 dramedy film, directed by Alexander Payne and based on a novel by Kaui Hart Hemmings. The film stars George Clooney as a Hawaii based lawyer. When his wife is in a boating accident and is left in a coma, he has to care for his daughters on his own, despite knowing little about them, while fighting a breakdown when he's told his wife's living will demands she be taken off life support. When one of his daughters reveals that his wife was cheating on him, he begins a journey with his daughters (and one of his daughter's 'friends') to find the man, partially to confront him and partially to tell him he should come say goodbye before she dies. No relation to Descendants.