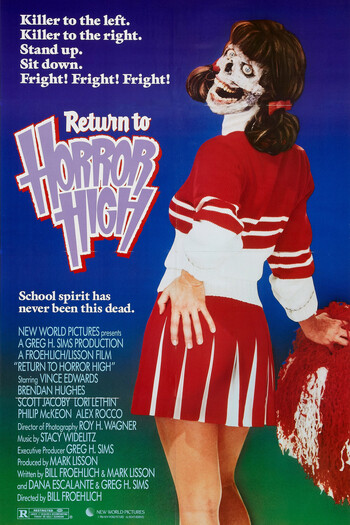 A 1987 Horror film, directed and co-written by Bill Froehlich, that's tremendously self-aware and very solidly a B-Movie. But it was George Clooney's film debut as well as Philip McKeon's film debut.

In 1982, a series of murders happened at Crippen High School and the killer was never caught. Five years later, sleazy movie producer Harry Sleerik (Alex Rocco) has decided to film a horror movie at the site of the school. As filming goes underway, the actors start disappearing... Is it the sole survivor of the original massacre who's returned as the film's screenwriter? The principal of the school, who insists on playing the same role in the movie? The creepy school janitor? The former high school jock playing the leading man?