Film / Out of Sight 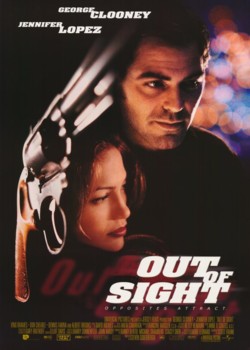 A 1998 crime drama/romance film based on the Elmore Leonard novel of the same name, starring George Clooney as Jack Foley, a gentleman bank robber, and Jennifer Lopez as Karen Sisco, the US Marshal tasked with apprehending him. Due to an impromptu hostage situation, Foley and Sisco find themselves locked in the trunk of a car together, where they quickly form a connection. Albert Brooks is Richard Ripley, a rich businessman and former fellow inmate of Foley's, with a stash of diamonds that Foley wants to steal. Don Cheadle plays Maurice "Snoopy" Miller, another former fellow inmate, a complete psychopath also looking to steal the diamonds.

Directed by Steven Soderbergh, Out of Sight is considered a highlight of Lopez's career, and it helped salvage Clooney's movie career after the Batman & Robin disaster.

Karen Sisco, a sequel series starring Carla Gugino in the title role, ran for a single season on ABC in 2003.