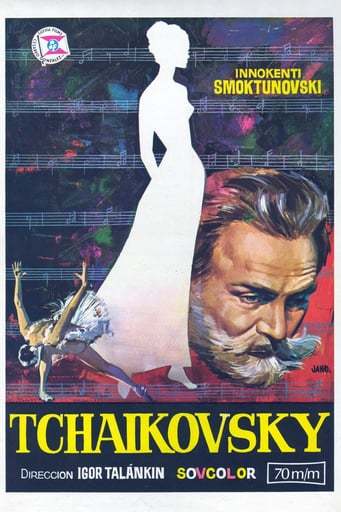 Tchaikovsky is a 1970 film from the Soviet Union, directed by Igor Talankin.

It is a biopic of—well, no prizes for guessing. After Pyotr Ilyich Tchaikovsky (1840-1893) is seen briefly as a child, the film skips forward to the 1860s and the composition of his first symphony. He forms a friendship with pianist/composer Nikolai Rubinstein, who criticizes some aspects of Tchaikovsky's work but later becomes his foremost advocate. Tchaikovsky becomes the foremost composer of his day despite unending hostility from contemporary Russian music critics. He marries, but the marriage is a disaster and ends almost instantly. Far more significant is his 13-year relationship with his admirer and patron, rich widow Nadezhda von Meck, who financially supports him as he climbs to the top of the music business—but never meets him.