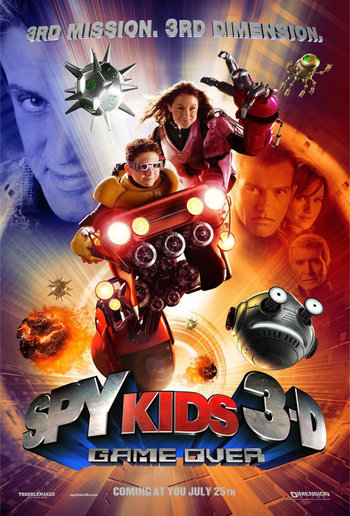 Spy Kids 3-D: Game Over is a 2003 adventure comedy film. It is the third film in the Spy Kids franchise.

Juni Cortez has retired as a secret agent and now works as a private investigator. He learns from the OSS that his sister Carmen has been trapped inside the virtual reality game Game Over. Juni goes inside the game to save his sister from the game's creator, the Toymaker (Sylvester Stallone). Daunted by the game and desperate for help, Juni invites his grandfather Valentin Avellan (Ricardo Montalbán) into the game, who apparently has a history with the Toymaker.

A sequel was released eight years later, titled Spy Kids: All the Time in the World.

Example of:
Back for the Finale