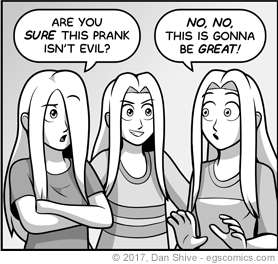 Which one is the real Diane?note None of them! From left to right: Grace, Justin, and Ellen.
Advertisement:

When creating a Me's a Crowd, Literal Split Personality, an Evil Twin or any kind of Doppelgänger, or averting Only One Me Allowed Right Now in a time-travel based story, the duplicates will wear different clothes when forced into doing more than one task at once to ensure they remain apart. Sometimes it's a matter of wearing a similar outfit that's Color-Coded for Your Convenience, or they could be wearing different clothes entirely based on what they have available. After all, when you're Opening a Can of Clones, clothes may not be duplicated with the extra bodies, or an error in the cloning process could be introduced to help the audience tell the two apart.

When encountered by other characters unaware of the duplication factor, they may be mystified on how they changed their clothes so fast, averting Changing Clothes Is a Free Action.

Compare the Identical Twin ID Tag, where the characters are both individuals who look alike and use a significant feature to distinguish between the two, and Palette Swap, where a duplicate is colored differently to make it appear unique.

See also Color-Coded Multiplayer, for when this trope is enforced in video games.