Dyeing for Your Art 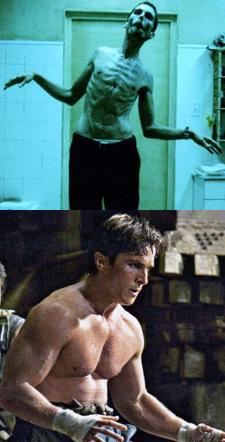 Every job has its demands, and many people make sacrifices in their personal lives to advance their careers. However, actors and actresses sometimes experience some peculiar demands on their physical appearance, well beyond the common restrictions in other professions that may simply require neatly-trimmed hair of a natural color.

There are limitations to what can be done with stage makeup and padding. When performers make real changes to their physical appearance for a part, such that they look different in the mirror in the morning, that's commitment. That's Dyeing for Your Art.

This entry does not cover those actors and actresses who dye their hair all the time for professional or personal reasons e.g. Billie Piper, Gwen Stefani and the late Marilyn Monroe. They're Dye Hard. Though the two can overlap sometimes if an actor prefers the hair color they were required to change to and keeps it that way. When Dyeing For Your Art affects the appearance of another character played by the same actor, see Real Life Writes the Hairstyle.

Often overlaps with Oscar Bait nowadays. When the casting directors opt to have the actors focus on their performance instead of the character's appearance it's Ability over Appearance.