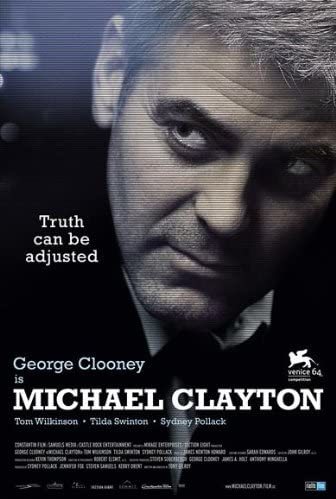 "The truth can be adjusted."
— Tagline
Advertisement:

A 2007 legal thriller starring George Clooney, Tom Wilkinson, Tilda Swinton, and Sydney Pollack. It is the directorial debut of screenwriter Tony Gilroy, best known for the The Bourne Series.

It centers on Michael Clayton (Clooney), a "fixer" — a person who solves difficult situations by tampering with the legal system — at the New York City law firm Kenner, Bach, & Ledeen. Clayton finds himself embroiled in a case involving his mentally-unstable colleague, Arthur Edens (Wilkinson), and the agricultural conglomerate his firm is representing in a class-action lawsuit.