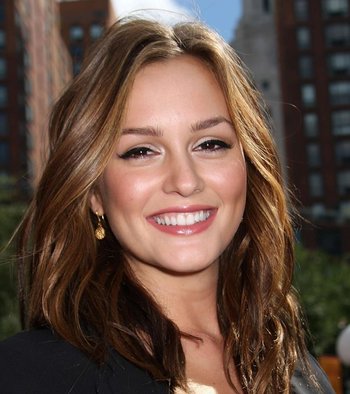 Leighton Marissa Meester (born April 9, 1986 in Fort Worth, Texas) is an American actress and musician. She was born in Texas in a rather unconventional situation - her parents were serving time in prison for their participation in a marijuana-smuggling ring - and so she was Raised by Grandparents for the first few years of her life. She started modelling at the age of eleven and also doing TV commercials. At the age of fourteen, she transitioned to television work debuting on an episode of Law & Order: SVU.

After appearing on several hit TV shows such as 8 Simple Rules, TwentyFour, Crossing Jordan, Veronica Mars and 7th Heaven, she landed a role on an upcoming CW Prime Time Soap. She was cast in Gossip Girl as Blair Waldorf, spoiled Alpha Bitch extraordinaire. The show ran for six seasons, Blair becoming the show's Breakout Character and Leighton predicted as a rising star. Unfortunately some poor choices of film projects - The Roommate, Monte Carlo (2011), The Oranges, That's My Boy - caused a lot of her momentum to die down.

Leighton hasn't let that deter her, releasing an album called "Heartstrings" that did respectable business. She also appeared on Broadway for a version of Of Mice and Men, playing Curly's wife, for which she received lots of praise. She's married to fellow Teen Drama star Adam Brody (of The O.C. fame) and they have two children.