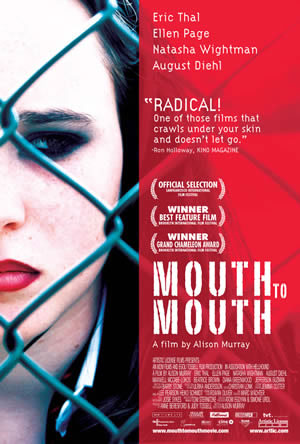 We gather she isn't the perky kind.
Advertisement:

A 2005 drama film written and directed by Alison Murray and starring Elliot Page as Sherry, a young runaway fleeing from a dysfunctional family. She is seduced by Tiger into joining a collective named S*P*A*R*K, standing for Street People Armed with Radical Knowledge. The leader Harry becomes gradually more authoritative and Sherry's mother Rose joins the group.

The film is a Road Trip Plot, shot in England, Germany, France and Portugal. The film had a very small opening, but Elliot Page's outbreak as an actor brought it back to the public eye. Some of points of interest include its harsh realism, presentation of a rarely represented portion of society, and depiction of a complex grey/gray relationship between a mother and daughter. Its overexposed contrasted landscapes are also a beautiful love letter to Europe. Also, Page shaves their head and finally plays Batgirl.