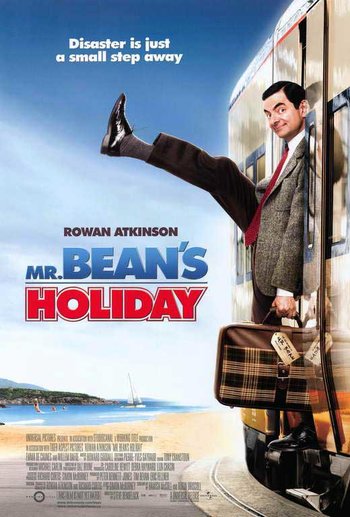 The second movie based on Mr. Bean following Bean. It is a loose remake of Mr. Hulot's Holiday, the film that originally served as the main source of inspiration for the character of Mr. Bean. In a way it seems somewhat like the series coming full-circle, as barring a few sparse reprises in TV spots and the 2012 Olympics in London, this film marked Rowan Atkinson's final major appearance as the Mr. Bean character, nearly 12 years after the original TV series ended. Significantly less Americanized than the first movie, this film sees the character returning to his near-mute origins and plays out more like an extended skit than a Big Damn Movie.

On his way to Cannes, Mr. Bean (Rowan Atkinson) accidentally loses his wallet and travel documents and accidentally separates a young Russian boy from his father, a filmmaker on his way to judge the Cannes film festival. Despite the language barriers, Bean sets out to reunite the boy with his father, see France and have his perfect holiday.