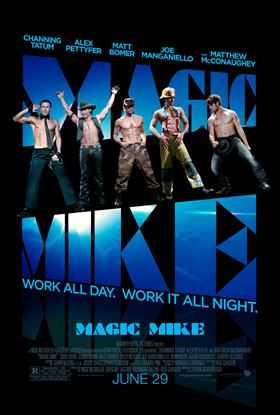 Magic Mike is a 2012 drama-comedy film directed by Steven Soderbergh and starring Channing Tatum, based on his year working as a male stripper. It completely objectifies the male body as a sex object, which certainly makes a nice change. Alex Pettyfer, Joe Manganiello, Matt Bomer, Olivia Munn, Matthew McConaughey and Riley Keough also star in this movie.

A sequel, Magic Mike XXL, was released on July 1, 2015, with most of the cast reprising their roles. The film adds newcomers Amber Heard, Jada Pinkett-Smith and Donald Glover to the cast; Gregory Jacobs, a producer on the first film, handled directing duties. A third film, Magic Mike's Last Dance, was later announced for a 2022 release on HBO Max, this time with Soderbergh returning to the director's chair. The franchise also received a Reality TV adaptation, Finding Magic Mike, also on HBO Max.

Compare Hustlers, a genderflipped Distaff Counterpart version of the movie that's also based on the real life story of strip club employees. See The Full Monty which is similar to Magic Mike but set in northern England and mixed with Flashdance.