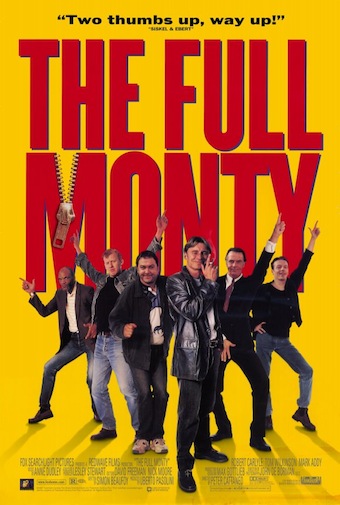 It's England, but not that "Monty".
Advertisement:

The Full Monty is a 1997 British black comedy written by Simon Beaufoy and directed by Peter Cattaneo.

Set in Sheffield, England, the film follows the story of six unemployed men, four of them former steelworkers, who attempt to make money as strippers. No, wait, come back, it's really good. The film was a modest hit, released in the summer of 1997 to stellar reviews and decent box office, and then was a surprise nominee for Best Picture. The film made $257 million worldwide on a budget of $3.5 million, $45 million of which came Stateside.

The film was adapted into a Broadway Musical in 2000, which moves the plot to America, and into a stage show in 2013, once again set (and premiering) in Sheffield.

Compare Magic Mike which is also a movie about male strippers but set in the United States instead of the United Kingdom.