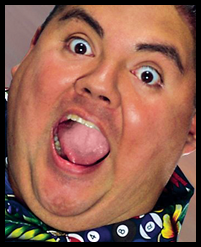 The last thing a (piece of) chocolate cake will ever see.
"Like Julio (Iglesias), but bigger. Way... bigger."
— Fluffy, about himself, on =3
Advertisement:

Gabriel Jesus Iglesias (born July 15, 1976) is an American actor and stand-up comic known for his funny impersonations, crazy sound effects and obnoxious Hawaiian shirts. He started his career on All That (during the time when the show's popularity was fading, as the original cast had left and the new cast was met with criticism with not being as funny as the old cast), and ended up getting specials on Comedy Central. He's also known for his good-natured Self-Deprecation and bright attitude about being what he calls "fluffy".

All of the hilarious stories he tells have basis in truth. He happens to live a quite crazy life and draws from these experiences. He also likes chocolate cake and is delighted and surprised when fans bring it to him.

the Aloha Fluffy special). He also cameo-ed as a Dominican ganster in Narcos (whose infamous fate was even officially memorialized

by the Netflix YouTube page). Subsequently, he had a recurring appearance on the short-lived ABC sitcom Cristela.

He now stars in, and executive produces, his own eponymous sitcom, Mr. Iglesias, for Netflix.