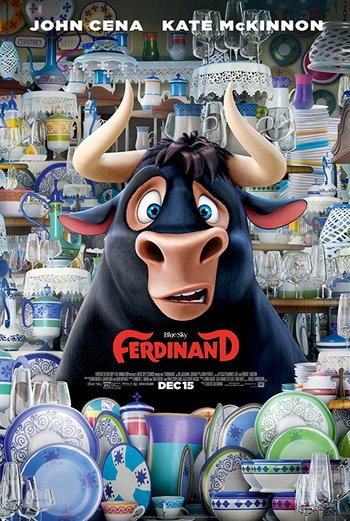 Ferdinand is a 2017 movie by Blue Sky Studios, adapted from Munro Leaf's children's book The Story of Ferdinand. It's directed by Carlos Saldanha, who directed the Rio films, and is the book's second Animated Adaptation after Disney's 1938 Silly Symphonies short.

The film, like the book, tells the story of a bull named Ferdinand (voiced by John Cena) who loves flowers. One day, he's taken from his family by some men mistaking him for a dangerous beast and is put in Casa del Toro—the same bull house he escaped from as a calf. Ferd reunites with his calf-hood rivals Valiente (Bobby Cannavale), Guapo (Peyton Manning) and Bones (Anthony Anderson), along with Scottish bull Angus (David Tennant) and mute and stoic bull Maquina (Tim Nordquist). Not wanting to fight and determined to return home, Ferdinand rallies a Ragtag Bunch of Misfits—consisting of a wise but slightly unstable goat named Lupe (Kate McKinnon) and a trio of hedgehogs; Una (Gina Rodriguez), Dos (Daveed Diggs) and Cuatro (Gabriel Iglesias) to help him escape, all while proving that you can't judge a bull by its cover.

The movie was released on December 15, 2017, and was the last Blue Sky Studios film to be released by 20th Century Fox as a standalone studio prior to its acquisition by Disney which announced its buyout a day before this movie was released, who ultimately handled distribution for their next and final film Spies in Disguise in 2019, with this being their penultimate film before the studio was shuttered in early 2021.

This animated film features examples of

♫ I'm on my way
Driving at 90 down those country lanes
Singing to "Tiny Dancer"
And I miss the way you make me feel, and it's real
We watched the sunset over the castle on the hill... ♫
Feedback

The horses show off their elegant ballet-inspired moves, which the bulls counter with street dancing.

The horses show off their elegant ballet-inspired moves, which the bulls counter with street dancing.