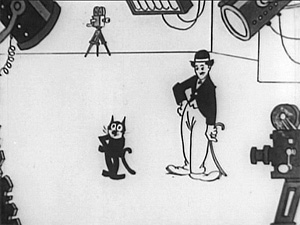 A July 15, 1923 short subject featuring Otto Messmer's cartoon star Felix the Cat. The short is centered around Felix as he tries to get a job in show business, and encounters some other stars of the era such as Charlie Chaplin along the way.

This short is Public Domain and can be viewed here

Tropes Used In This Short