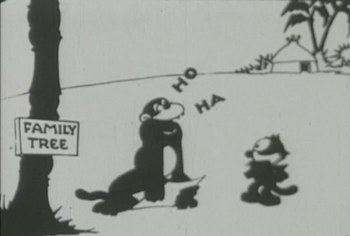 Felix Doubles for Darwin is a 1924 Felix the Cat cartoon, directed by Otto Messmer and produced by Pat Sullivan.

Felix is busy pacing around near a pond, hungry. Impatient, he quips “I'd give eight of my lives for a square meal!!” and shows his ribcage to the audience. Suddenly, a large fish pops out of the water and eyes Felix's tail. It goes underwater to grab its fishing pole and bait (which Is a small fish) and tosses it ashore to lure Felix to him. Felix falls for it and grabs the fish, but gets dragged into the water as the big fish tries to eat him. Felix evades him and makes it back ashore, but is frustrated that he still has nothing to eat.

Not far away, an organ grinder and his pet monkey are reading the newspaper. Just as Felix shows up, Felix notices the man looking back and forth between the paper and his pet chimp. Felix inquisitively asks whats up, and the man hands him the newspaper, which shows that the Evolution Society is offering a large reward for proof that man comes from monkey. Felix, intrigued, makes a deal with the organ grinder—he'll find out the answer, and then split 50/50 on the money. He agrees, and Felix walks off. Felix heads to the shoreline, but doubts that a boat will be able to get him to Africa. Fortunately, he eyes a Trans-Atlantic cable building just nearby. He tries to go inside, but gets chased out by the cable operator, who throws bricks at him and yells at him to stay out. Felix quickly comes up with a plan, tying a loose cable leading inside the building to a brick nearby. Felix challenges the operator to come out and fight like a man. The operator comes outside and grabs the brick, not realizing that the wire connecting to his headphones is tied to the brick. He throws the brick, which misses Felix and ends up dragging him off, giving Felix a chance to get inside the building.

Inside, Felix pulls a lever that sends a signal through the wire directly to South Africa, and he travels right across the ocean through the Trans-Atlantic cable. He has a brief encounter with a swordfish that breaks the cable, but Felix bends its nose and escapes back through the cable. Arriving in Africa in the form of a morse code signal, Felix morphs back to normal and begins looking around. During his search, he begins climbing what he thinks is a palm tree, only to discover that its the giant legs of a very large bird, which chases him. Felix manages to trap it inside of a log, and moves on. Felix tries to go inside of another log, only to discover that its actually the trunk of an elephant, which spits him out and then throws him through the air.

Felix lands in Ape Town, where he pulls out some binoculars and watches the everyday life of the monkeys there. He finds them doing things like dancing to the Charleston, riding a hippo like a bus, and having a literal family tree. Felix decides to whistle for one of the monkeys to come down. Felix shows him the newspaper, showing a picture of a Modern Statesman, and then pictures of Modern Cake-Eaters. Felix finally asks “Ask these your relatives?” The monkey, insulted, yells to his family “Ye Gods fellers—he says we're related to these!” and he and the rest of the monkeys begin chasing Felix. Felix runs back to the transatlantic cable and squeezes in, but the monkeys decide to follow him. Felix arrives back in the US, but is horrified to find the monkeys trailing right behind him. He meets up with the organ grinder again, who asks “Well? Do we come after monkeys?” Felix looks behind him, and replies “The monkeys come after us! Look!” as the monkeys start pouring out of the cable building. Felix and the Organ Grinder both run away from the monkeys together as the film irises out.