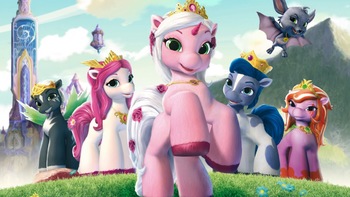 It's a magical world, where everyone shines!note The Filly Five from left to right: Will, Bella, Rose, Cedric, and Lynn. Top right is Battiwigs.
Advertisement:

Filly Funtasia is an All-CGI Cartoon show created by Danish brothers Jacob and Henrik Andersen for Dracco. The show is based on Filly, a Hong Kong-based line of pony dollsnote Filly is actually not German contrary to popular belief, as it wasn't founded by Simba; they were simply the distributors of the toyline until 2014. (which has been around since 2006). It was produced by Dracco Brands with assistance from Guangzhou Huamai Animation Studios in Hong Kong and B-Water Animation Studios in Spain. It was also formerly produced by the Spanish company BRB Internacional, who also made The World of David the Gnome and Around the World with Willy Fog, with outsourcing from Black Dragon in China. The brand as a whole has been subject to some controversy due to its similarity to the My Little Pony franchise.

The series is about a group of royal ponies, the Filly Five (Rose, Cedric, Isabella, Lynn, and Willow) as they attend a magical academy in the kingdom of Funtasia. As they study their crystal powers, Wranglum, the Wizard of the Dark Mirror, along with his minion Battiwigs, try to steal all of the magic inhabited in the kingdom. The show is (rather infamously) well known for going through Development Hell for 5 years, prior to finally being announced that it'd premiere March 11, 2019 on Frisbee in Italy.

In China, Filly Funtasia had a successful release on iQiyi on November 28, 2019 with a Mandarin Chinese dub, titled The Colorful Wonderland of the Little Fillys. In January 2020, Filly Funtasia was "renewed"note The first 13 episodes were released solely for season 1, while the other 13 were pushed to a second season. for a second season of another 13 episodes in October, and was officially released Christmas Day in 2020. Two other seasons are accordingly planned as well.

In early 2021, three episodes only in Englishnote "Hide and Seek", "The Filly Mermaid", and "Farina, the Fire Dragon" were released on the free KidsFlix app, as well as the MyToonz

app, unannounced. The same episodes were also made available for viewing on the Airtel Xstream provider service

in India, through KidsFlix. On March 3, 2022, the series finally saw its official English release on Channel 5 in Singapore, this time with a different, more polished English version, and a completely different episode order, mixing in episodes from both seasons.

A trailer for it can be seen here

. Another one can be seen here

, a third one here

, and a fourth one here

. The most recent English trailer with new voices can be found here

. It has its own Equestria Daily style news site here

Crystal mirror, show me some tropes!

From Now Until Forever

From Now Until Forever