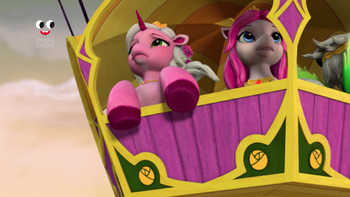 Filly Funtasia has lots of Awesome Music, mostly used as background music, though there are also a few songs that are sung In-Universe by the characters. Unfortunately there isn't an official soundtrack for the show yet, which upsets many fans as most of the songs that we get to hear have been cut for time.

"Oh, Rose! I booked some extra singing lessons for you, because I'm afraid you need them, dear."