Western Animation / Around the World with Willy Fog 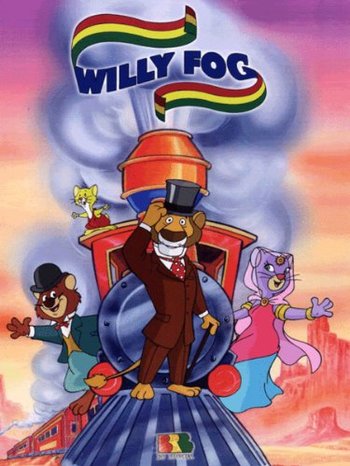 "Fog! I'm the one who made the bet, and I know I'll be exactly right on time. Fog is my name and I can play with my life in many ways, that's what they say."
— Willy Fog
Advertisement:

From the same stable as Dogtanian and the Three Muskehounds, this 1983 Spanish/Japanese cartoon (whose original title is La vuelta al mundo de Willy Fog) did for Jules Verne's Around the World in Eighty Days what its predecessor did for The Three Musketeers, namely populated it with Funny Animals, gave it a fun Lighter and Softer makeover, and put it on at teatime. (The show eventually aired in Japan as well, but not until 1987.)

The basic plot of Jules Verne's novel remains intact: dull, wealthy gentlelion Willy Fog (Phileas Fogg in the booknote The French dub, of course, gives him back his original name.) gives up his orderly lifestyle when he accepts a wager that he can travel around the world in eighty days. On his journey he faces opponents who have followed him from London, as well as the constant struggle to catch boats and trains on time and all the perils foreign countries, climates and people can throw at him.

Other characters include Rigodon (Passepartout in the novel), Tico their mascot-a, and Romy (Aouda in the novel), the gentle touch (they all love her so much).

Rigodon, a cat, is a circus acrobat who hoped for a quiet retirement when he applied for a position as Fog's valet but now finds himself dragged into adventure. He is accompanied by Tico, a hamster-thing in red dungarees.

Romy, a cat, is an Indian princess rescued by the travellers from a suttee, who falls quickly into the role of group chick, medic, and Love Interest for Fog.

Dix (Fix in the novel) and Bully (original character), canine detectives from Scotland Yard, believe that Willy Fog is a bank robber using an unlikely cover to flee from justice. They pursue Fog and his party unrelentingly and do their best to obstruct them. Fortunately for Fog they're a pretty incompetent pair, especially bulldog Bully.

Transfer (original character) is a sinister Master of Disguise hired by the members of Fog's London club who have bet against him, to ensure Fog cannot win. His true form appears to be a wolf but he can disguise himself as any character, though viewers can spot him from the way one eye gleams red at suitably dramatic moments. Unlike Dix and Bully, who just want Fog under arrest, Transfer is actively out to kill or incapacitate him.

The show's theme song was so popular that when the presenter of Children's BBC offered viewers a Willy Fog Song Sheet printed with the lyrics, demand was overwhelming. The original Spanish version was similarly popular and was performed by the famous band Mocedades. Keiko Han provided the Japanese themes.

In the 1990s, the series was followed by Willy Fog 2 which has Willy, Romy (now his wife) and friends having new adventures directly adapted from Verne's most famous science fiction novels, Journey to the Center of the Earth and 20,000 Leagues Under the Sea. As with Dogtanian, BRB enlisted Taiwanese studio Wang Film Productions to animate the sequel, rather than Japan's Nippon Animation which had done the original series.

BRB Internacional has uploaded the full series and its sequel on their YouTube channels.

Tropes appearing in the sequel series:

Example of:
Garden of Love