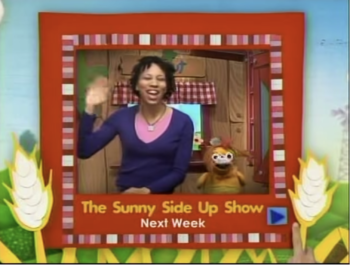 Stay tuned!
During the 1970s and 1980s, the increasing popularity of channel surfing led to networks putting mini-trailers for their shows on the start of that very show. Usually preceded by "on tonight's X..." or "this time, on X...", the clips would then show all of the best stunts, most of the guest characters, an overview of the plot and sometimes even reveal major plot twists. As most shows back then weren't exactly complex affairs, this usually meant that the entire plot was summarized in the first two minutes, turning the following runtime into a tedious exercise of filling in the gaps.
Advertisement:

Ironically, although the practice was invented to keep people from flicking over to another channel, summarising the entire story in two minutes may have had the unexpected side effect of facilitating channel surfing.

These days this trope is almost exclusively reserved for Reality Shows, and even then only shows the first ten or fifteen minutes. This is still annoying for some, however, since any show that involves members of the cast being voted out at the halfway point can be inadvertently spoiled for those that are paying attention to who's in each scene.

In console games, this is a subtrope of the Attract Mode.

Compare Trailers Always Spoil, Spoiler Opening and On the Next.