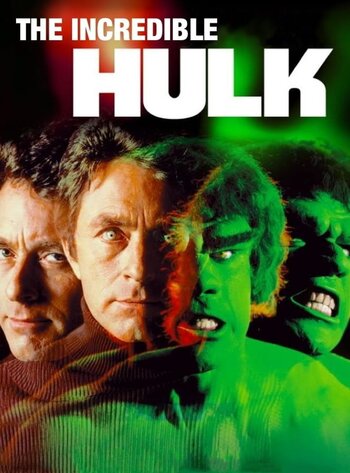 "Dr. David Banner: physician, scientist; searching for a way to tap into the hidden strengths that all humans have.
Then an accidental overdose of gamma radiation alters his body chemistry.
And now, when David Banner grows angry or outraged, a startling metamorphosis occurs....

Banner: Mr. McGee, don't make me angry. You wouldn't like me when I'm angry.

The Creature is wanted for a murder he didn't commit. David Banner is believed to be dead and he must let the world think that he is dead, until he can find a way to control the raging spirit that dwells within him...."
— Opening Narration* Read by Ted Cassidy, aka Lurch from The Addams Family.
Advertisement:

As stated in the opening narration above, David Banner is a widowed scientist who was studying humanity's ability to unleash hidden super-strength when under duress along with finding the source of said ability. Trying to make himself stronger through gamma radiation, he ends up accidentally giving himself an overdose. Now, whenever Dr. Banner gets angry or faces great emotional pressure, he transforms into a giant, green-skinned man-monster capable of great strength and driven by rage. With his alter-ego blamed for a double murder (David is believed to be one of his victims) and chased down by a tabloid journalist, David is forced to let the public believe he is dead as he travels the country searching for a cure for his condition. Unfortunately for him, he often finds himself involved in situations that require him to unleash the beast that lives inside him.

Preceded by a pair of Pilot Movies — The Incredible Hulk (aired on November 4th, 1977) and Death in the Family (no, not that Death in the Family; aired on November 27th, 1977) — the series proper aired from March 10th, 1978 to May 12th, 1982 and was in turn followed by three late-'80s Made for TV Movies. The first was a Poorly-Disguised Pilot for a Thor series, the second was a Poorly Disguised Pilot for a Daredevil series (neither of which got made), and the last ended with the Hulk being Killed Off for Real, though this was not originally the intention, as the Hulk was going to be resurrected in a fourth film. However, it was cancelled due to low ratings, then any plans for a fourth film ended permanently with the death of Bill Bixby in 1993.

Oddly, despite the many radical changes made to the concept — ranging from the character's first namenote Depending upon who you talk to, either the producers didn't want an "alliterative comic-booky name", or they thought the first name "Bruce" sounded stereotypically gay. Though it's also quite likely that there was another famous Bruce used as a civilian identity. all the way up to his enemies and locale — it managed to embrace and faithfully support the core idea of the original comic book. It remains one of three superhero adaptations from the 1970s that is remembered fondly to this date, the others being Wonder Woman and Superman. Hulk fans keep it close to the heart and future projects with the character from comics, games, and film frequently make reference to it as Mythology Gags.

Now has a characters page and a recap page.

The opening of the She-Hulk season 1 finale provides an homage to the Incredible Hulk's opening.

The opening of the She-Hulk season 1 finale provides an homage to the Incredible Hulk's opening.