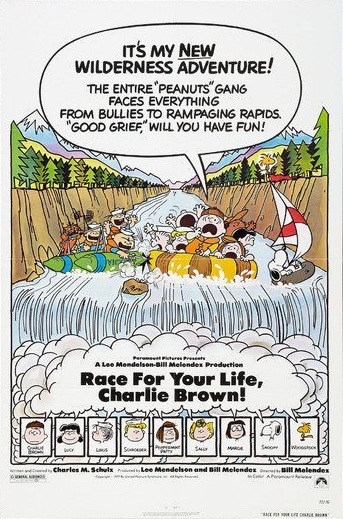 Wow, that's quite the promotional spiel to yell as
you go over a waterfall, Chuck!
Advertisement:

Race for Your Life, Charlie Brown is a 1977 animated film directed by Bill Meléndez. It is the third of the feature-length movies based on the Peanuts comic strip by Charles M. Schulz.

This one follows the Peanuts gang as they head off to Camp Remote in the Rocky Mountains, where they find that their experience is much like boot camp sans drill instructor: crack-of-dawn exercise followed by a chow line and then a series of competitive activities, culminating in a river-rafting race which pits them all against some pretty treacherous obstacles, including a group of bullies who cheat every step of the way. Peppermint Patty is in charge of the girls' raft and has the drive to be leader (though every little decision, no matter how petty, is made with a vote), while Charlie Brown, who heads the boys' raft, slowly but surely comes to see that he must somehow take leadership if either team can hope to win against the bad guys. Meanwhile, Snoopy and Woodstock find themselves dealing with their own problems as per usual.

Known mainly for being the most action-filled Peanuts adventure, with some realistically scary-for-kids stuff like getting separated in the wild and coping with the many hazards that somebody left alone in the woods along a river would face. It was also one of the first videodiscs released in the early 1980s, though it took until 2014 for the film to make it onto DVD.

Race for Your Tropes, Charlie Brown:

Could the end credits for "Race For Your Life, Charlie Brown" get even more 1970s?

Could the end credits for "Race For Your Life, Charlie Brown" get even more 1970s?