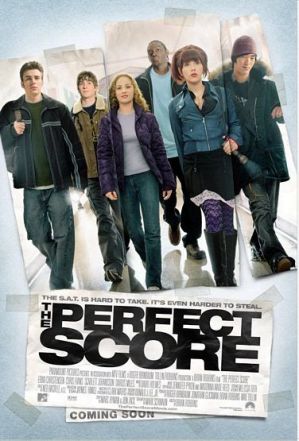 The Perfect Score (2004) is a teen heist film directed by Brian Robbins, starring Chris Evans, Bryan Greenberg, Scarlett Johansson, Erika Christensen, Darius Miles, and Leonardo Nam as six students whose futures will be jeopardized if they fail the upcoming SAT exam. In order to prevent this, they conspire to break into the building and steal the answers for the upcoming exam, which will allow them all to get perfect scores. The film deals with one's future, morality, individuality, and feelings.

The film has similarities to other high school movies, including The Breakfast Club and Dazed and Confused, which are often referenced throughout the film. However, the film was panned by most critics and performed quite poorly at the box office, losing out to the ironically named dance film: You Got Served.

The film may be an unofficial remake of the obscure 1997 Irish film How to Cheat in the Leaving Certificate.