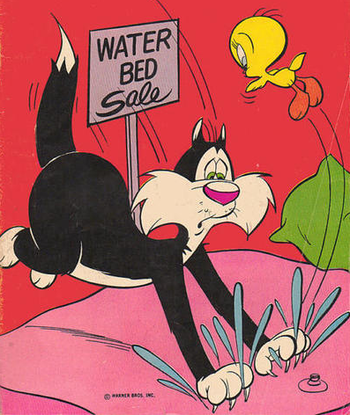 Cat + waterbed = claws for concern.
"I got a waterbed, but my husband stocked it with trout."
— Joan Rivers
Advertisement:

A waterbed is a mattress that replaces the internal foam and springs with, you guessed it, water. In fiction, the water is often used to create absurd situations that would be unlikely — if not outright impossible — on a spring or foam mattress. The flowing nature of the fluid is often exaggerated, and water-related jokes are made at the expense of realism.

Real Life waterbeds were designed in the 19th century for hospital purposes, as spring-based mattresses often caused bedsores. Popular Science Fiction author Robert A. Heinlein is often credited for their quick rise to popularity in America during The '70s and The '80s, due to including a high level of speculative detail in some of his fictional works. As the new waterbed design swept the nation, many creators responded with a wave of jokes based on their (mis)use. However, the production of waterbeds has greatly decreased since their peak in the 80's, and tends to be a Forgotten Trope, more common in older media than in current fiction. Their relative obscurity in the modern day can cause an Aluminum Christmas Trees effect to those who have never encountered them in real life. Works featuring waterbeds are thus generally dated to the 1970's or 1980's.

Waterbeds encourage the absurd; they were celebrated for their novelty, but their squishy and bouncy nature, as well as the inconvenient way they can rupture and spray water everywhere, have tied them to comedy. You might find fish living in the bed, perhaps intentionally or maybe they swam upstream. If characters try standing on the bed, they'll quickly lose their balance and end up bouncing around as if they were on a trampoline. Such absurdisms are based on Rule of Funny, given the furniture's Awesome, yet Impractical status.

In some cases of Fantastic Voyage plots, Swallowed Whole, and video game levels based on internal anatomy, squishy internal organs can serve as waterbeds, especially those filled with a liquid such as water or blood.

Compare Gelatinous Trampoline, Solid Clouds, Springs, Springs Everywhere, and Trampoline Tummy, which have similar jiggly and/or bouncy properties. If everything seems to be made like a waterbed, that may be Rubbery World instead. Waterbed mishaps (causing varying degrees of flooding) overlap with Murphy's Bed. Does not usually overlap with Soft Water, unless one were to use it as a landing zone without it rupturing or the person being injured. Walk on Water involves literally walking on liquid water without anything covering the water like a waterbed.

Snoopy and Peppermint Patty get trapped on a waterbed

Snoopy and Peppermint Patty get trapped on a waterbed