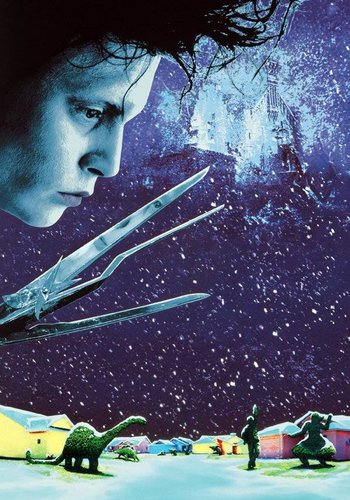 "The story of an uncommonly gentle man."
Advertisement:

To paraphrase Linus van Pelt, of all the Tim Burton movies in the world, this is the Tim Burtoniest. And we mean that in the best possible way.

This 1990 film was Burton's first after the mega-success that was Batman (1989), and with the rather free hand he was given, he decided to shoot for the moon with a serio-comic Fairy Tale. He came up with the concept and Caroline Thompson handled the screenplay.

The titular hero (Johnny Depp) is Exactly What It Says on the Tin, a sort of android. His creator, a lonely inventor (Vincent Price, in what was his final film appearance), upgraded a robot from his assembly-line machinery in his gothic mansion on a hill until it finally almost completely resembled a young man - however, he died just before completing his project by giving Edward hands. Thus, he was left alone with the scissor-and-shear limbs he already had. Edward shyly, quietly keeps to himself, passing the time by tending the garden (in particular, sculpting the bushes into whimsical images) until one day...an Avon lady comes calling. Peg Boggs is a resident of the 1950s-60s pastel suburbia that lies at the bottom of the hill. Realizing he is friendly and mostly harmless, as he understands the dangers his blades pose, she compassionately decides to take him to live with her family.

At first, Edward is welcomed by this community and he is quite happy to be of help to it; in particular, his talent for yard decoration progresses to dog grooming and eventually hairstyling. He's so fascinatingly alien that a local tart, Joyce, even tries to seduce him. Ironically, he falls in love with Peg's teenaged daughter Kim (Winona Ryder), one of the few who isn't immediately enamored with him — and who already has a boyfriend, the Jerk Jock Jim (Anthony Michael Hall). Jim decides to take advantage of her love for him to convince her to take advantage of Edward's innocent kindness, so he will help them commit a burglary. The consequences of this start a chain of events that lead to a most Bittersweet Ending.

While only a modest success at the time, in part because of the strange premise and perhaps because Home Alone effectively commandeered the holiday movie season that year (both were 20th Century Fox releases), it's since gained a large fanbase, and was the first of eight collaborations between Burton and Depp.

In 2005 the film was adapted into a ballet by British choreographer Matthew Bourne. Over 2014-15, a two-volume comic book Distant Sequel written by Kate Leth with art by Drew Rausch was published by IDW.