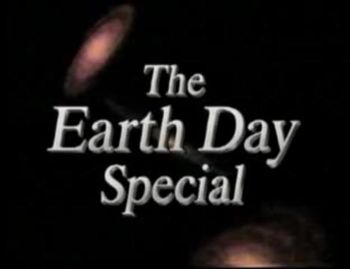 "We have searched the skys for signals... Our spacecraft have explored dozens of exquisite worlds in the family of our sun... But as far as we've looked, there's only one place in the entire universe where the miracle of life exists... Our own planet Earth. Life is so rare and precious. We must safeguard... protect... and cherish it."
— Opening Monologue
Advertisement:

And so begins The Earth Day Special, presented by Time Warner and aired on ABC in 1990 to mark the 20th anniversary of Earth Day. It's Earth Day, and a man named Every Man is boasting about the progress mankind has made. Suddenly, Mother Earth appears in the skies, chiding them all for taking the web of life for granted. Feeling ill, she falls to Earth. Now humanity must learn to get their act together or Mother Earth's a goner.