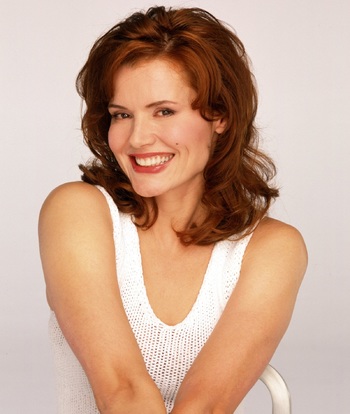 "When my friends and I would act out movies as kids, we'd play the guys' roles, since they had the most interesting things to do. Decades later, I can hardly believe my sons and daughter are seeing many of the same limited choices in current films."
Advertisement:

At the turn of the millennium, out of frustration with the ongoing lack of quality, high-profile roles for women in film and television, she established the Geena Davis Institute on Gender in Media to advocate for change; her ongoing work in this regard won her an honorary Academy Award (the Jean Hersholt Humanitarian Award, to be specific) in 2019.

Oh, and, she placed 24th out of 300 in the qualifying trials for the U.S. womens archery team for the 2000 Olympics, not quite making the team.