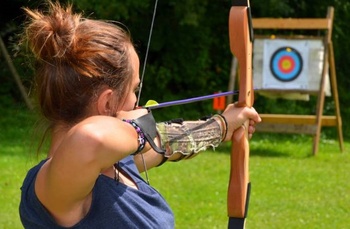 Disclaimer: This information is presented purely for educational purposes, particularly for creators who may want to depict archery more accurately. You should seek professional instruction if you want to learn archery, and we are not responsible for any harm that may come from attempting to imitate the practices described herein.

Ah, archery. Basically the art of using a bent stick with a string tied between the ends to shoot a smaller pointed stick at something quite a long way away, it began as a techinique of primitive survival, spent a long time as a major force on the battlefield, and has finally become a rewarding pastime enjoyed by athletes and hobbyists the world over. Fiction loves to depict archery, as demonstrated by the enduring popularity of folk heroes such as Robin Hood, along with more modern characters such as Legolas, Hawkeye, Green Arrow, Rambo and Katniss Everdeen. However, what you see is often determined by Rule of Cool and may give you an unrealistic or overly narrow idea of what archery is. This summary can help you to start learning about archery.

First, some safety rules in no particular order. See here

Remember, the rules are in place because nobody's perfect. No matter how skilled you are, it's still possible for your equipment to malfunction or for you to make a rare mistake, and following the rules can make the difference between your accidentally loosed arrow embedding itself harmlessly in a backstop, or making you responsible for accidentally shooting a human being.

Arrow wounds can be very serious, and are particularly tricky with barbed arrowheads. You can't leave any part of an arrow where it is—and the process of removing it is probably more painful than being shot in the first place, if you're not unconscious or drugged. You'd need to get the arrow cut out of your flesh, by the way. And that's only if a trained surgeon has the tools for it, lacking that the only alternative is to push the arrow out the other end, break it and then pull the shaft out which is as painful as it sounds. Yanking it out would cause lots of bleeding, may cause permanent damage depending on where it is/wasnote an arrow in the arm or leg is not Just a Flesh Wound. It is a Potential Nerve Damage Wound!, and at the very least would make the wound much harder to treat than if a trained medic/surgeon made some very careful incisions before carefully pulling it out.

The main drawback of archery as a basis for military forces throughout history was the learning time needed: It takes weeks to build up the strength to shoot even a light 25-pound bow consistently, and far more time to develop good instinctive aiming (which was necessary in the days before sights and clickers) while working up to weights that would be useful in hunting or warfare. Altogether, it takes months and years of continuous practice to get to the point where you can shoot a heavy war bow repeatedly and accurately: a popular saying in England was that "To make a good archer, start with his grandfather." Also, something as minor as slouching or head position can affect your shooting drastically, while guns can be shot from any reasonable position. The fact that early guns were comparatively quicker to learnnote emphasis on "comparatively" quicker; performing the many steps of reloading quickly and in the proper sequence took a lot of drilling, and was especially hard to do under the stress of combat—and did not require the shooter to be impressively strong in muscle groups that most people rarely use—was a major factor in them replacing bows in a military contexts. Other factors were that bullets struck with more energy and penetrated armor more easily than arrows, that the lead ammunition was a lot easier to mass-produce than arrows, that opponents unused to guns could be terrified by all that noise and smoke, and that the butt or bayonet of a musket could make it a viable melee weapon, while the bow was basically useless as soon as you ran out of arrows. These advantages helped to make up for the musket's lower rate of fire. That said, the disappearance of the bow from military conflict was mainly a Western European phenomenon: in Eastern Europe, Northern Africa, the Middle East, and Asia, many warriors carried and used both bow and musket for different applications.

Despite what it looks like, arm strength is the worst way to judge how much draw weight you can pull—you'd risk dislocating your shoulder every time you draw. The back and shoulder muscles are the ones that should bear the draw-weight, and one should only use the arm muscles to keep them properly aligned. (This is why archers are typically depicted as Fragile Speedsters or Glass Cannons.) Most people are unaccustomed to using their back muscles, and may need a much lighter draw-weight than they think; rule of thumb is to get a bow that only requires 75% of one's strength at first. Beginners are strongly advised to have someone act as a spotter for the first few weeks, since improper technique can lead to extensive problems both short- and long-term.

Also, if you prefer traditional archery (anything but a compound bow), you should always unstring your bow when it's not in use. This greatly increases your equipment's lifespan, so you won't have to worry about your bow and/or string breaking in half only a few months later.

There are common misconceptions to the effect that modern archery is "easier" than traditional archery, or that modern bows don't require skill because they practically "shoot themselves". However, asking which requires more skill is like comparing apples and oranges because they are different tools and are judged by different standards. A modern recurve or compound bow has mechanical aids to accuracy and consistency, but such aids merely increase the maximum potential accuracy and precision that can be achieved. They do not shoot the bow for you, and how much accuracy you get out of your bow still depends on how good your technique is. Skilled traditional bow archers can shoot them almost as accurately and precisely as modern recurve bows at the relatively short distances you might encounter in indoor ranges, but they become far less precise and accurate than the modern bows at long range where tools like a clicker, sights, and stabilizers become necessities. Modern style archers can do much more than traditional archers, but because of this a lot more is expected of them. The distances at which they have to shoot and the precision with which they're supposed to hit the target are beyond the capability of something like an English longbow. At the extreme end, such high performance is expected from compound bows that the winner of a compound bow tournament isn't so much the one who surpasses the others by reaching closest to perfection, as they are the one who deviates the least from the perfection required by making the fewest screwups. So using a modern bow isn't easier or harder than using a traditional one; the goal is made to fit the tool.

Yes, archery is hard. It's pretty damn awesome once you get it right, though.

While the most famous type of bow in the Western world is the English longbow, there are several commonly-found types that vary in style, materials, and shooting technique.