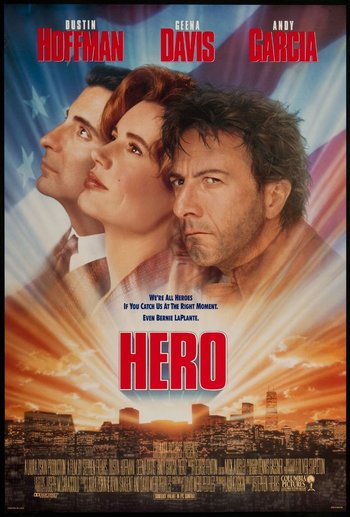 Accidental Hero (released in the US as simply Hero) is a 1992 comedy-drama film directed by Stephen Frears and starring Dustin Hoffman, Geena Davis, Andy García, and Joan Cusack.

Bernie LaPlante (Hoffman) is the scum of the earth; a lowlife minor criminal and lifelong cynic who only looks out for himself first and foremost. However, by chance, Bernie happens upon the site of a plane crash and, upon an appeal to what remains of his better nature by a young survivor looking for his father, ends up rescuing the passengers from the wreck, including star TV reporter Gail Gayley (Davis), losing a shoe in the process and discarding the other.

Upon learning of the anonymous hero who selflessly risked his life to save others, the media leaps on the story and issues an appeal for the hero — complete with reward. Upon learning of the reward, Bernie decides to come forward, only to face several problems; he's in jail, absolutely no one believes he's capable of being a hero, and the 'hero' has already come forward — John Bubber (Garcia), a homeless veteran who not only appears to be the perfect hero, but has the only proof of who was there in the form of Bernie's discarded shoe...