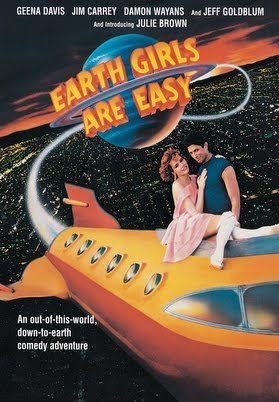 A 1988 science fiction musical romantic comedy based on a novelty song by Julie Brown and starring Geena Davis and Jeff Goldblum, as well as Damon Wayans and Jim Carrey before they were famous. Set in an improbably colorful version of the San Fernando Valley wherein bright orange-and-red spacecraft crash-landing in backyard pools and spontaneous musical numbers aren't much cause for comment.

On Earth, Valerie (Davis) is a nail technician whose relationship with her fiance Doctor Ted Gallagher (Charles Rocket) is going through a dry patch. Ted hasn't given Valerie any intimate attention in at least two weeks, and Valerie is down in the mouth about it. He promises to make it up to her the next night but she has a nail convention to go to.

Candy, Valerie's friend at the Curl Up And Dye Salon (Julie Brown) suggests skipping the convention and getting a super sexy makeover to get Ted's attention. The rough patch is made rougher when Valerie waits all dolled up for him and he comes home with one of his cute blond nurses. Furious, Valerie kicks Ted out and destroys his belongings before the heartbreak sets in.

This is when the trio's ship crash-lands in Valerie's swimming pool. Valerie thinks she's just stressing from her upset over Ted, and tries to swim past what she believes is a hallucination. She bumps her head on the ship and falls unconscious. The commander, now wide awake, realizes she'll drown and rescues her. There's a language barrier, so Valerie flies into a panic, fearing the worst.

The aliens don't seem to want to hurt her, but in her upset state, Val yanks on random levers on the dash and floods the ship. She apologizes for what she's done, and invites them to stay with her while she gets the pool drained so they can dry out their ship and return home. They don't understand at first but they learn English from TV and quickly adapt to the California lifestyle. Val, on hearing it will take the whole weekend to drain the pool and dry out their ship, takes the aliens to her friend's salon for makeovers so they can pass for human until the pool is drained, the ship is dried out and capable of taking off.

To the delight of everyone involved, shaving all the neon-colored fur off the tourists unleashes three pieces of man-candy on Southern California.

Zeebo and Wiploc become party boys, but Mac pretty much concentrates on learning English and communicating with Valerie. He realizes that she is unhappy due to how Ted treats her, but dismayed that she doesn't seem to think she deserves better. The alien boys get into wacky adventures courtesy of Candy wanting to party with them. Ted hates the boys on sight, and when he realizes that they're not what they seem, Mac and Val have to hatch a plan to rescue Zeebo and Wiploc.

Will Valerie stick with Ted, or will the gorgeous Sensitive Guy From Outer Space win her heart?