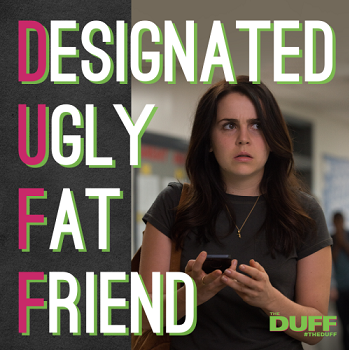 The Duff (stylized as The DUFF) is a 2015 American teen comedy film directed by Ari Sandel and written by Josh A. Cagan, based on the novel of the same name by Kody Keplinger. The film stars Mae Whitman, Robbie Amell, Bella Thorne, Bianca Santos, Skyler Samuels, Ken Jeong, and Allison Janney.

Bianca (Whitman) is an intelligent, suburban, white, American, self-respecting teenage girl that strives to conform to societal standards of beauty and romantic compatibility. Bianca is insulted and devastated when Wes (Amell), football player and on-again/off-again boyfriend of Madison (Thorne), says she's the titular DUFF (Designated Ugly Fat Friend) - but she soon realizes that Wes is right; the students in her high school are only interested in her as a way to get to her beautiful friends Jess (Samuels) and Casey (Santos). She takes her anger out on her friends and 'unfriends' them on social media and in person...

The novel is later followed up by LOL: Lying Out Loud.

The DUFF exhibits these tropes: