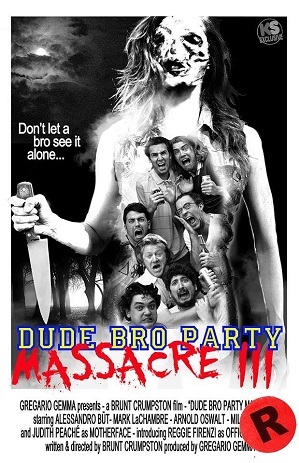 "It's much worse than the first two."
— Leonard Maltin
Advertisement:

Dude Bro Party Massacre 3 is a 2015 horror-comedy Slasher Movie by 5 Second Films. It was funded on Kickstarter.

A major part of the film's charm is its fictional production history. The story goes that this film, the third in a series of mediocre low-budget horror movies, was a direct-to-TV sequel that nobody asked for. After its first airing at midnight in the late 80s, DBPM3 was banned by executive order of President Ronald Reagan, with this copy only existing because a teenager stayed up to record the broadcast on his VCR.

In the previous two films (which don't actually exist), after a Panty Theft gone wrong, a sorority mother takes bloody revenge on the perpetrating Delta Bi Theta fraternity. Although she is killed, her daughter puts on a mask made from the dead woman's disfigured face, takes on the moniker "Motherface", and makes another attempt on the fraternity.

Come this film, loner Brent Chirino learns that his twin brother Brock, a member of Delta Bi, has been murdered. To discover the truth and find the murderer, he must infiltrate the fraternity and their latest Dude Bro Party...