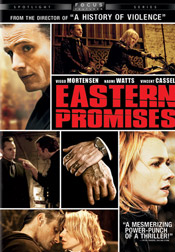 Anna: So you've read the diary. How can you keep doing what you're doing?
Nikolai: I'm just the driver.
Advertisement:

Eastern Promises is a 2007 crime drama by David Cronenberg.

The story revolves around Anna (Naomi Watts), a midwife at a London hospital, who discovers a diary belonging to a teenage girl who died during childbirth. Her efforts to translate the diary and thus find a family for the girl's baby end up embroiling her with a powerful figure in the Russian mob and the human trafficking and prostitution trade.