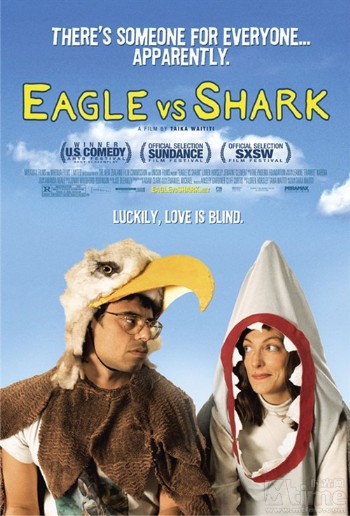 Eagle vs Shark is a 2007 dramatic-romantic-comedy starring Jemaine Clement and Loren Horsley. It is the first feature-length film directed by Taika Waititi, and received accolades at the Sundance Film Festival.

Lily (Horsley) is a painfully awkward young woman working in a fast-food restaurant with a crush on a regular customer, Jarrod.

Jarrod (Clement) is an equally awkward, videogame-obsessed nerd with virtually no redeeming qualities.

Things heat up when Lily shows up uninvited to a "dress as your favorite animal" party hosted by Jarrod and wows him with her savant-like videogame skills. Later, Jarrod confesses that he has to return to his hometown in order to get revenge on his high school nemesis, Eric Elisi (who is Samoan). Lily, smitten, tags along and meets Jarrod's dysfunctional extended family and other assorted inhabitants of the town. Everything falls apart from there.