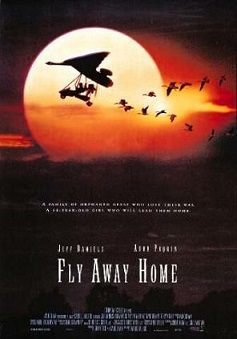 Fly Away Home is a 1996 family film Very Loosely Based on a True Story, directed by Carroll Ballard (The Black Stallion) and starring Anna Paquin, Jeff Daniels and Dana Delany.

After her mother dies in a car accident, Amy Alden (Paquin), a 13-year-old girl, moves from New Zealand to Ontario to live with her father, Thomas Alden (Daniels), an eccentric inventor whom she barely remembers (her parents split up when she was 3). Amy doesn't like the lonely surroundings, she doesn't know what to make of her father, and she misses home and her mother.

Then one day, after a bulldozer has knocked down a tree on some property near their house (which Thomas is upset about), Amy discovers a nest of abandoned eggs on the ground. She takes the eggs to Thomas' barn, and they hatch into baby geese. Because of the process of "imprinting", the geese think Amy is their mother, and she takes care of them as a mother would. However, soon it will be time to migrate south, so Thomas, an amateur pilot, builds ultralight aircraft for himself and Amy so they can get the geese to fly and then be able to fly south for the winter. Along with the problems of flying, and getting the geese to fly, Thomas and Amy also have to deal with Glenn (Jeremy Ratchford), a park ranger who initially tries to pinion the geese to render them flightless (Amy doesn't respond well to this), and then wants to confiscate them when they start flying. Not only that, but Amy and Thomas' intended destination for the geese (a bird sanctuary in South Carolina) becomes a battleground between environmentalists and developers.