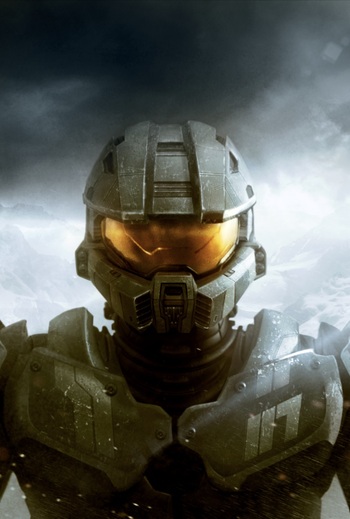 "The UNSC needs time to develop effective countermeasures against Covenant technology, and it’s your job to buy that time. You need to make the alien commanders afraid of us. You need to convince them that humans are crazy, that anytime a Covenant fleet outruns its support or fails to consolidate its advances, we will find a way to make it pay."
—Admiral Preston J. Cole
Advertisement:

Halo: Silent Storm is the 26th book in the Halo franchise, written by Troy Denning, making this his third Halo novel.

It is the first year of the Human-Covenant War, and the UNSC is still operating in the dark about the scale and capabilities of their enemy. Desperate to gain a foothold, the Spartan-II program, led by a young John-117 and initially developed to fight Insurrectionist groups in the Outer Colonies, are turned against the Covenant and tasked with intelligence gathering in the hope that some way of delivering a decisive blow to the Covenant onslaught can be discovered. Operation: SILENT STORM is enacted to that end, but the Spartans are faced with a familiar enemy as they encounter heavy resistance from the United Rebel Front, who see the Covenant invasion as an opportunity to break free from Earth's governance, and are even willing to consider forging an alliance with them to do so. With one Sangheili Shipmaster willing to give the Insurrectionists an ear, the Spartans are on a race against time to prove humanity can stand up against the alien invaders.

It is followed by a direct sequel, Halo: Oblivion.