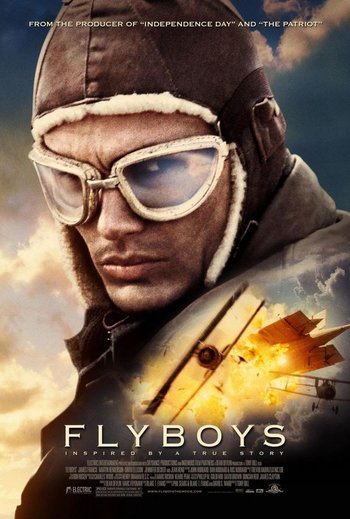 Flyboys is a 2006 film, directed by Tony Bill, about American fighter pilots flying for the French Lafayette Escadrille in the mid period of World War I.

Blaine Rawlings (James Franco), a rancher whose farm has recently been foreclosed, heads to France to help fight in World War I. There he meets Reed Cassidy (Martin Henderson), a disillusioned ace who teaches Rawlings and his squad to fly and shoot Germans under the command of French captain Georges Thenault (Jean Reno).

During a disastrous bomber-escort mission, a German called the Black Falcon strafes one of Rawlings's squadmates on the ground. Rawlings is frustrated by the fact that only he seems to care about the breach of honor, and vows his own revenge.

Later, during a far more successful assault on a German zeppelin, Cassidy is killed by the Black Falcon, although he takes the zeppelin down with him.

After a second, this time successful, bombing mission against the same target, Blaine chases down the Falcon. After a lengthy dogfight, Blaine kills the Falcon with a pistol he was given by Cassidy in the beginning of the movie.